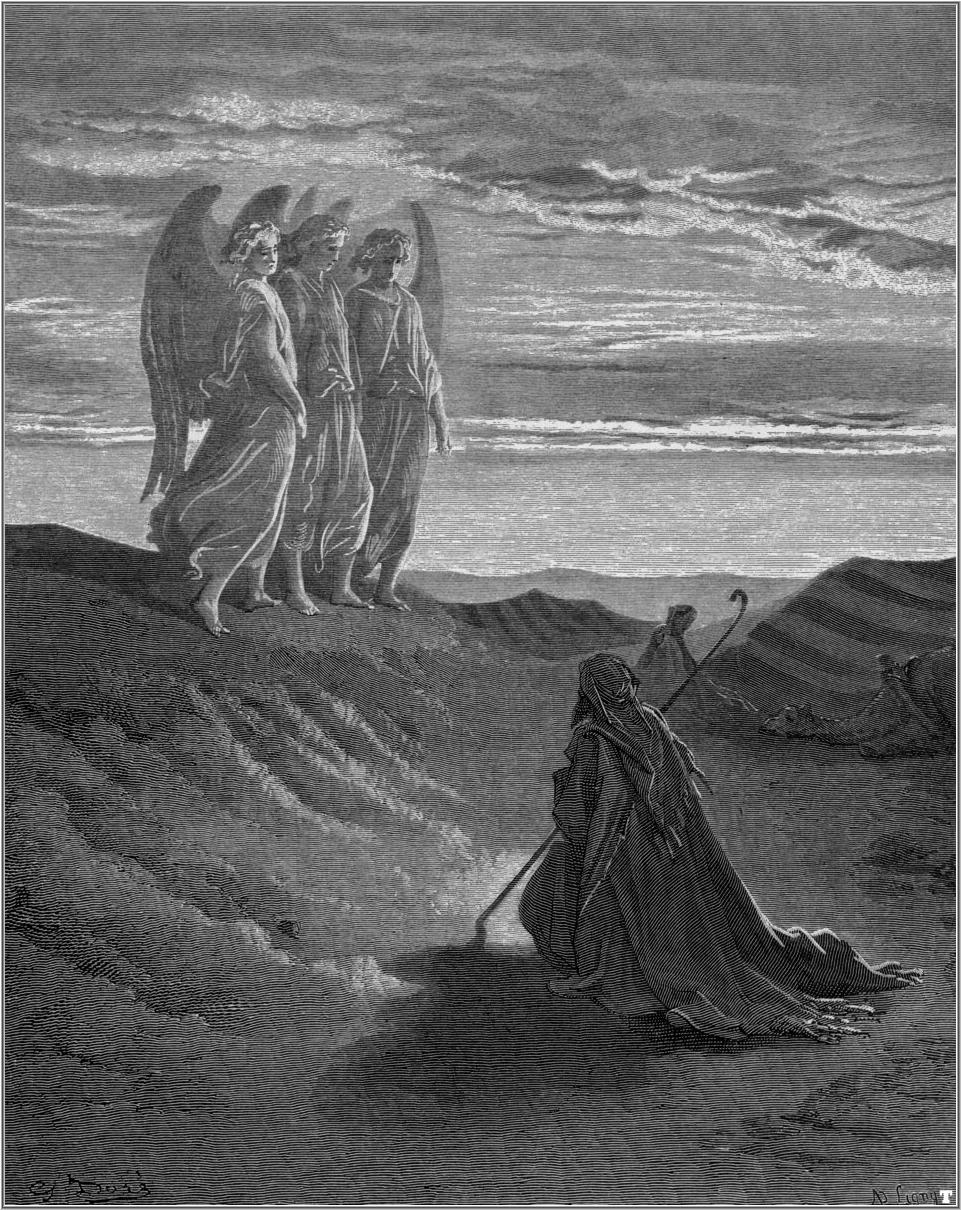 Yesterday I had two people use the word "universalist" on me. I couldn't understand it. But, I listened. Both of them led their reasonings out of Acts 10 (Cornelius). How amazing is that!

They call me leaning toward universalism because of my perspective that comes from John 9 as I wrote in the previous post, and my understanding of Romans 1.


Abraham and the Three Angels, by Gustave Dore

Perhaps one need not know about Jesus in order to be granted eternal life? That is the question I pose.

Their mutual answer about Cornelius immediately made my eyebrows raise because I recalled that when I talked with Dr. Radmacher about my testimony of salvation, he gave his answer to it, also by sending me to Acts 10 for the story of Cornelius.

Do you think God wants me to learn something from Acts 10?? I do!

I read it back then, and I didn't get it. I still read it the same old way as always -- Cornelius worshiped God and God accepted it, before his hearing the good news of Christ. Only now when others have read it to me have I heard things that are new.

The point I believe is universal: if someone wants to know God, even though they have no idea who Christ is, God will move heaven & earth, so to speak, to get the Gospel to them, so they can hear it, believe & be saved. But I also believe the Bible teaches just as plainly that there is no salvation outside of Christ. (Ac.4:12; Jn.14:6)

Two timezones away, in the same couple hours that these two comments were being written for my consideration, I was on the phone with Antonio da Rosa who I had never spoken with verbally before. I was listening to this passage for the first time (then later came and saw the comments). He said he was concerned at the universalist twinge in my previous post and in others. He read Acts 10 and pointed out verse 43:

"To Him all the prophets witness that, through His name, whoever believes in Him will receive remission of sins.”

That though Cornelius found God through what has been made known of Him plainly in creation (as Romans 1 explains), Cornelius was still in need, and more importantly seeking God's salvation. Cornelius's remission of sins could not have taken place because otherwise Peter's message would have been irrelevant and unnecessary.

I didn't know what Dr. Radmacher wanted me to learn out of this passage. He must have seen the universalist bent in me too.

Blessings to the three who addressed me. I am so grateful to have heard and thought more upon this.

I tell you, it was so horrible, the last couple years of my faith. I was bitter because I felt like no one could hear the messages of scriptures such as John 9, like I could. I would bother with linking to the threads at bible.org where no one responded to the Word as I presented it; unfortunately now you have to be a registered member of a group to access them. The experience among them wasn't the only source of disillusion.

And if I had not received timely help from a couple of key people, and had not found Free Grace, I think it possible that I would have painfully stayed in a direction toward something like universalism.

Indeed you are to them as a very lovely song of one who has a pleasant voice and can play well on an instrument; for they hear your words... ezek 33:32
Posted by Sanctification at 10:16 PM

I am amazed by your humility! I've read those posts and myself became enflamed in defense of you. I fear the heavy hand you flourish under! Maybe someday I will not and learn a lesson as well deserved as this. :)

Missy, wow, I keep blabbing and someone is listening. Thank you for encouragement. I imagine most if not nearly all who have believed in Jesus have suffered. Maybe someone else could have handled my circumstance better than I. I said to one confidant "Jesus does not seem like a friend to me" and to the other I said even recently "God abandoned me." Is it horrible. I just could not conceive why God did not expediently help me as His Word explained -- hence another pull to doubt the infallibility of scripture. I was not a faithful servant. But

"if we are faithless,
he will remain faithful,
for he cannot disown himself." 2 tim 2:13

I can't help but be caught up in wonder at his kindness. For while I still have little answer to the confusion, because I returned to faith in Him and I walk with Him now, He has found a use for me in His good work.

The LORD is Amazing!!