Part One: Christian Nationalism is Unbiblical

[ This is going to be a three part series. Part one will cover the unbiblical theology we'd best avoid. Part two will describe American exceptionalism and how it has created quite opposing political agendas, especially amongst Christians. Part three will update poor theology with a biblical framework of "exile," that Christians might better channel their faith.]

Part One: What Not to Believe

If you ask a “Patriotic Christian” the question, “Does the founding of our country on Christian ideals give Christians today privilege to dominate politics and law?” they would whole-heartedly agree.  Their expectation of political outcomes follows suit. Non-Christian citizens owe it to Christians to let them dominate the political agenda. Christians have a God-given right to have this society ordered by God’s Word.  Much quotation of the Founding Fathers is used as birthright, on par to scripture itself:

"We have this day restored the Sovereign to whom alone men ought to be obedient. He reigns in heaven and from the rising to the setting sun may His kingdom come."

But to quote mere men like this is to add to scripture. I’m not here to revive a debate on the history of whether America was founded as a Christian country.  But I will ask you to be honest: isn’t it an irrelevant question?  Whether it was or not doesn’t change the fact that our constitution grants religious liberties to all faiths.

“Yes, but my faith in Jesus guides me to be a politically-active American.  I want what God wants.  And God does not want these changes.”  I can hear the responses.  Christians are tired. Over the last 50 years they've been losing social prominence as witnessed by legalized abortion, changes to the institution of marriage and gender dysphoria, and the removal of God from our military, schools, holidays, etc. It’s time to ask some sobering questions about how God thinks about America.  Does America belong to God?  Is America special in God’s eyes?  What does God want Christian Americans to fight for?  If God wants us to fight, can that even mean violent force?

Unfortunately, Jesus’ has no plan for a Christian theocracy (co-mingling of God’s law and government) in America; not from its inception and not for its future.  How do I know?

Because of the scriptures.  Scripture makes it clear the American government will not be the conduit of Jesus’ kingdom-come on earth.

The Future Kingdom of Jesus

Daniel 2:44 “And in the days of these kings the God of heaven will set up a kingdom which shall never be destroyed; and the kingdom shall not be left to other people; it shall break in pieces and consume all these kingdoms, and it shall stand forever.”

All of the earth’s governments will be restored to God through the second advent of Christ (Col. 1:20).  The most significant Gentile empires throughout all of history are represented in the statue of Nebuchadnezzer’s prophetic dream.  The feet of iron mixed with clay was hit by the rock not cut with human hands (Dan. 2:34-45).  This rock is the government of Jesus.  During the time this post-apocalyptic government reigns, all nations of the earth will offer their greatness to the kingdom of the Most High, whose is an everlasting Kingdom, and all dominions will serve and obey Him (Dan. 8:27).  On that day -- our desire for a theocracy will be satisfied.

The Patriot would refute, “But -- America was founded on better things in God’s eyes!”  Scripture itself may have been the guiding light which frames the constitution - but it isn’t enough.  No mere man’s words, no matter how godly, brilliant and glorifying to God as they may be, are any guarantee.  No human has willfully indebted or obligated God.  America shares in common the condition of all governments on earth - corruption.  No amount of political reform can ultimately purge the corruption in any government; even a largely Christian one.  How do I know?  Scripture.  Satan is currently the god of this world (2 Cor. 4:4).

Matt. 4:8-9.  “Again, the devil took Him up on an exceedingly high mountain, and showed him all the kingdoms of the world and their glory.  And he said to Him, ‘All these things I will give You if You will fall down and worship me.’”

Satan offered America to Jesus as a temptation because Satan owns America - and Jesus refused to take the governments.

The Former Offer of the Kingdom

Jesus’ government nearly arrived 2000 years ago.  Jesus offered a Christian kingdom, a God-ruled government (theocracy) to first-century Israel - but not to the nations.  In the beginning half of Jesus’ ministry He and John the Baptist preached “Repent, for the kingdom of God is at hand [or, near].”  It was at hand because their Messiah had arrived and if they repented they could have ushered in their Messianic kingdom. 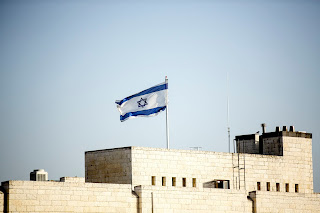 The people of Israel had three conditions to satisfy so that they might receive the kingdom of Christ: 1- they must accept their Messiah 2- they must be living in the promised land and 3- they had to have spiritual obedience to God’s commands.  When the people refused to repent and meet the conditions required, and when the Pharisees demonstrated unbelief at Christ’s miracles, that offer was put in abeyance (put on delay).  This turning point was in Matthew 12:24.  Jesus set aside the offer of a Christian kingdom away from Israel and began to teach them in parables.  From then on when Jesus teaches, the kingdom is not at hand and it will be postponed till after the church age.  That is why in Acts when the disciples asked a risen Jesus when the kingdom would be established, Jesus changed the topic:

Acts 1:6-8 “Therefore, when they had come together, they asked Him, saying, ‘Lord, will You at this time restore the kingdom to Israel?’  And He said to them, ‘It is not for you to know times or seasons which the Father has put in His own authority.  But you shall receive power when the Holy Spirit has come upon you; and you shall be witnesses to Me in Jerusalem, Judea and Samaria, and to the end of the earth.’”

Are There Any Special Promises God Can Make with America?

Seems straightforward to say, even Israel had conditional terms for possessing their inheritance!  But at least God had promised Israel to the Jews.  You might sum up the Abrahamic and Mosaic covenants by saying the land was unconditionally owned and conditionally possessed. Christian Americans have no such arrangement in the scriptures for us and this North American nation.  Even Israel got kicked out of their own land when they didn’t keep in obedient step with our God.  How much more can we expect to have no rights over our land!

“Special Promise” Proof Text #1  “Blessed is the nation whose God is the Lord” Psalm 33:12

Response: Well, which nation is it who has God as their Lord?  Isn’t that Israel?  Put the verse into context and read it again….  “Blessed is the nation whose God is the Lord, the people He has chosen as His own inheritance.”  The rest of the sentence identifies that nation whose God is the Lord; it is the people of His inheritance which is Israel of course.  Didn’t God promise blessing to Israel in Deuteronomy 30?  Of course.  Deut. 32:8-9 says, "When the Most High gave the nations their inheritance, when He divided all mankind, he set up boundaries for the peoples according to the number of the sons of Israel. For the Lord's portion is His people, Jacob His allotted inheritance." America doesn’t have a covenant like Israel, concerning possessing the land or blessing in the land.  America doesn’t have any promises in scripture.  Yet Franklin Graham, a Christian nationalist, used this verse and this verse alone as justification for his most urgent call to political action.

“Special Promise” Proof Text #2  “... if my people who are called by My name will humble themselves, and pray and seek my face, and turn from their wicked ways, then I will hear from heaven, and will forgive their sin and heal their land.”  2 Chronicles 7:14

Response:  This promise I am certain has truth in it that can be applicable to American believers.  Certainly we believe that if we humble ourselves God will lift us up for that is written in the epistle of James.  But once there is a promise toward a “land,” we have to ask ourselves is this part of the specific covenant God has with the land of Israel??  The answer is yes, this verse while in part relevant for all believers everywhere, has specific promise to the land of Israel alone, for it is only the nation of Israel who is given a promise from God.  Look at the context for more clues anyway - it is right after Solomon dedicates the temple.  God said to him one sentence above, “I have… chosen this place for Myself as a house of sacrifice” vs. 12.

The Patriot might ask, “I thought we could subvert American government to God’s blessings and authority?”  The logic goes that if there are enough Christians in a country who love God, God will give them what they want, which is control over the land.

While we commend that as many Christians run for office as possible, while we commend believers who use their right to vote and their rights to peaceful protest and recall and reform, we cannot go so far to condone this Christian nationalist falsehood in the public square: that America’s ruling caste is Christianity.

And Finally - And Most Sensitively - What About Violence?

How far should we go to advance Christ’s kingdom?  Should we fight for it?  Like, literally physically fight for the agenda of Christ?  Take up arms? 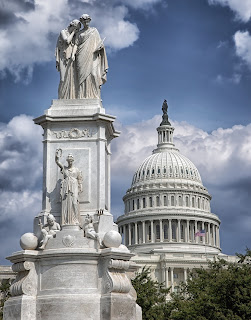 In light of Jesus’s words, how should we understand January 6th and the storming of the U.S. Capitol?  How does God feel about the Christians who were there with Jesus banners, hitting police with their flagpoles?

Jesus said, "My servants would fight" if His kingdom were here. Because the kingdom of God is not here, who were these violent Christians truly serving in the Capitol breach? Peter could have been a model citizen of the rioter's kingdom because he used a sword as they arrested Jesus.  He swung and sliced off a soldier's ear. But Jesus healed the soldier’s wound.  It is clear that Jesus did not condone revolutionary violence for spiritual matters, nor for any other such as Barrabus's.  Barabbas was jailed for murder with other insurrectionists of Roman rule.

Matthew 26:52  “Then Jesus said to him, ‘Put your sword back in its place; for all those who take up the sword shall perish by the sword."

In conclusion: this certain expectation of providence upon the political aims of well meaning-brothers and sisters needs a refresh. Together we can examine the truth about the hope of Israel and the millennial kingdom of Christ. Until the day of the Lord, we might do well to find a more biblical stance for our sojourn.

Posted by Sanctification at 7:59 PM 0 comments