Jim is in the hospital. He had a serious bike accident last night racing. He has 4 broken ribs, pneumothorax with chest tubes placed, cracked scapula, broken clavacle and cracked C7. He is in a lot of pain but doing better today.

Posted by Sanctification at 8:15 AM 9 comments

Man
Men were chosen as image-bearers of our ultimate authority, YHWH.  Our Lord God would not have given man a job and then not empower him to also succeed.  Women are commanded to think on how their own confidence in this is a measure of their confidence in God Himself (1 Peter 3:5-6).  And it does not take too much investigation to confirm that men are in reality dutiful in ruling by means of sacrificing themselves because of the way God made them (Ephesians 5:23 "...He is the Savior of the body.").

Theirs is an authority established in the Word thousands of years ago and stands to today.  "For the husband is head of the wife, as also Christ is head of the church" (Ephesians 5:23).  "...and gave [Christ] to be head over all things to the church, which is His body" (Ephesians 1:22-23).  "And I do not permit a woman to teach or to have authority over a man...." (1 Timothy 2:12).  Conversation's over, women.  What can I say after these scriptures?  Many feminist-empathetic Evangelicals tweak the command so that women might steal some authority for themselves - and that is my tough but honest opinion.

God gave authority to men; in fact, the command regarding the tree of life was given to Adam before Eve was made.  Yet a man's role in representing God's authority is not a complete package.  "It is not good that man should be alone" (Genesis 2:18).

Here comes woman.  She has no authority of her own - nothing explicit; nothing institutionalized.  And she never will have the hope of authority over a man.  But she has a contribution to make, does she not?  She comes replete with image-bearing design, too; a "helper suitable" (NIV), a "helper comparable" (NKJV) to him. The common application of the woman's help & succour are to matters of homemaking, and that is fair, but Adam's ultimate purpose is to worship and glorify God.  Is it possible that a woman's help is just as engaged as the man's leadership in seeing God's will be done?  I wonder if Jesus came in to the flesh in a way like Eve's design.  Luke 20:1-8


One day as he was teaching the people in the temple courts and preaching the gospel, the chief priests and the teachers of the law, together with the elders, came up to him. "Tell us by what authority you are doing these things," they said. "Who gave you this authority?"
He replied, "I will also ask you a question. Tell me, John's baptism—was it from heaven, or from men?"

They discussed it among themselves and said, "If we say, 'From heaven,' he will ask, 'Why didn't you believe him?' But if we say, 'From men,' all the people will stone us, because they are persuaded that John was a prophet."

So they answered, "We don't know where it was from."

Jesus said, "Neither will I tell you by what authority I am doing these things."

He was an iconoclast, and they felt threatened.  His mission was not to subvert but to fulfill; Matthew 5:17-18


Do not think that I have come to abolish the Law or the Prophets; I have not come to abolish them but to fulfill them.  I tell you the truth, until heaven and earth disappear, not the smallest letter, not the least stroke of a pen, will by any means disappear from the Law until everything is accomplished.

Just prior to His death Jesus promised to send believers "the helper," the Holy Spirit.  The establishment had not accomplished the Spirit of the law; Jeremiah 31:33-34


This is the covenant I will make with the house of Israel
after that time," declares the LORD.
"I will put my law in their minds
and write it on their hearts.
I will be their God,
and they will be my people.

No longer will a man teach his neighbor,
or a man his brother, saying, 'Know the LORD,'
because they will all know me,
from the least of them to the greatest,"
declares the LORD.

"For if that first covenant had been faultless, then no place would have been sought for a second" (Hebrews 8:7).  Christ is the wisdom of God (1 Corinthians 1:24, 1:30).  Wisdom is curiously also personified as female in the Old Testament.  She raises her voice to commend God's will toward those who already grip dominion, Proverbs 8:1-8


Does not wisdom cry out,
And understanding lift up her voice?
She takes her stand on the top of the high hill,
Beside the way, where the paths meet.
She cries out by the gates, at the entry of the city,
At the entrance of the doors:
"To you, O men, I call,
And my voice is to the sons of men.
O you simple ones, understand prudence,
And you fools, be of an understanding heart.
Listen, for I will speak of excellent things,
And from the opening of my lips will come right things..."

The man and the woman both are image-bearers of God.  The man is so in rulership, self-sacrifice, leadership and provision.  And the woman is so in supplying wisdom without which none could sustain life.  But depravity distorts the image.  In depravity, he forsakes his own responsibility and she no longer stands for truth but instead for a lie.

Like Adam in his depravity, any human not accustomed to wisdom find her voice unsettling.  Forget that it was Adam who should have first coined the essence of the popular t-shirt slogan, "I'm with Stupid" (Proverbs 9:13) by passing the buck saying "The woman you gave me," when God questioned Adam whether Adam had obeyed.  He betrays redemption for himself or those he will influence.  He makes life toilsome and unpleasant (Genesis 3:17-18) for everyone around him.  I pity his predicament.  Put any human in the same shoes, and any one might be just as tempted to point out the negative contributions others have made before admitting one's own failure.  A responsibility to influence or protect others is a burden.

Adam was right - Eve was devoid of understanding.  A woman in depravity is just as destructive to redemption because it turns the heart of a man to passion, though toward idols in the stead of God.  Her punishment is intense suffering in trying to cast the seed of the Spirit in the world (Genesis 3:16), and the whining and moaning comes in accordance with such.  In the Book of Proverbs there is the Woman Wisdom and there is another woman also called wisdom, who calls out with the same exact enticement, but the partakers of the false lady discover she provides no righteousness... only bondage and death.  Proverbs 9:1-6 depicts the true woman Wisdom...


Wisdom has built her house,
She has hewn out her seven pillars;
She has slaughtered her meat,
She has mixed her wine,
She has also furnished her table.
She has sent out her maidens,
She cries out from the highest places of the city,
“Whoever is simple, let him turn in here!”
As for him who lacks understanding, she says to him,
“Come, eat of my bread
And drink of the wine I have mixed.
Forsake foolishness and live,
And go in the way of understanding.


A foolish woman is clamorous;
She is simple, and knows nothing.
For she sits at the door of her house,
On a seat by the highest places of the city,
To call to those who pass by,
Who go straight on their way:
“Whoever is simple, let him turn in here”;
And as for him who lacks understanding, she says to him,
“Stolen water is sweet,
And bread eaten in secret is pleasant.”
But he does not know that the dead are there,
That her guests are in the depths of hell.

"Stolen water is sweet" - in the event the enticing call of "wisdom" is resounding noisily, and one cannot tell if she's real or fake, one might ask this discerning question: Does she tell them that they will find abundant life through tweaking His command so they may steal from what is off limits?  True Wisdom leads one to life without a violating sin of omission (1 Timothy 1:5, 8; Romans 14:23). 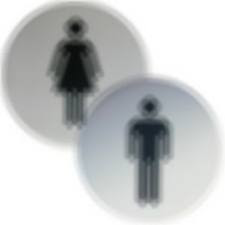 Conflict may be characteristically female and male.  It's bigger than just our relationship.  It's really about those who hold righteousness ipso facto and those who must carve it out and establish their own provision of righteousness and life through reform and revolution.  God creates position to enforce peace and order in society.  "For there is no authority except from God, and the authorities that exist are appointed by God" (romans 13:1).  But He also chooses people outside of establishment, too.  "...God has chosen... the things which are not, to bring to nothing the things that are, that no flesh should glory in His presence" (1 Corinthians 1:28-29).

God has designed many facets of our world where wisdom is, for example, cyclical or generational in nature.  What constituted a redeeming policy yesterday may not tomorrow.  Therefore, asking the question "what needs to be restored about this fallen world today?" and investigating its answer is a never-ending process that one either abides in or does not.  Consider the following (below) aspects of the world where the male-female tension is exhibited.  There is the one who has been given the position to accomplish God's purposes - and is doing it more or less successfully as God has equipped (caveat--God executes it perfectly).  And, there are those who are being served by the one of position; hopefully, the one in position becomes conscious of repeated requests of permissions to participate.  Like the Man toward the Woman, consider...
Agnostic, religious, or whatever: are God's image-bearers inviting a relationship with Wisdom?  Do they have a rapport with her; are they dependent upon her?  This son of Adam (Adam Lambert) sings, "What do you Want from Me" and intuitively agrees that this woman isn't operating out of depravity; he knows she holds truth.  Adam feels his own depravity.  One solution is to pass the buck.  The other solution has been calling out his name, assuring him that those who love wisdom love their own life.

Posted by Sanctification at 2:55 PM 14 comments