His divine power has given us everything we need for life and godliness through our knowledge of him who called us by his own glory and goodness. Through these he has given us his very great and precious promises, so that through them you may participate in the divine nature and escape the corruption in the world caused by evil desires.

The root Greek word for add is the same root word meaning "choreography."

I find this delightful. Like a dancer enhances and compliments the music with movement, so a Christian magnifies their faith by stepping in time with a Spirit-filled life.
Posted by Sanctification at 12:08 PM 0 comments

I saw the doctor on Wednesday after I mentioned to her last week some of the symptoms I've had for awhile that I can't explain. She had done a blood panel and discovered that my thyroid hormone is too high again (it fluxuates as it pleases). Ha! All the symptoms were right there under my nose; unable to sleep, extreme multi-tasking to the point of ineffectiveness, the room spinning, losing weight like it's bad news, never eating much, etc. I should have figured the problem out on my own. It explains now why I felt so awesome when I gave birth. I mean, I just felt so good. I had so much energy. You couldn't keep me down.

Ever since Wednesday I've been trying to gather intel of just how poor my mental facilities have become.

Last night I went to bed at ten but didn't fall asleep until 5 am. Somewhere in the mess of my thoughts in the night I remembered letting Elijah taste a smigeon of refried beans from my taco. That's not an allergen or a processed food, I surmised. But, wait a second, hmm.... Where do beans come from, anyway?

Then fear struck my heart, and my eyes flicked open with alarm. "Oh my gosh," I thought to myself, "I don't know where beans come from! I ought to, since I'm into life sciences; what's wrong with me?!? Do they come from trees?? Do they grow in pods, like peas?!? Do they grow in the ground??"

Then I started laughing. I couldn't help it.

High thyroid hormone, your weeks are numbered, and the number is six. 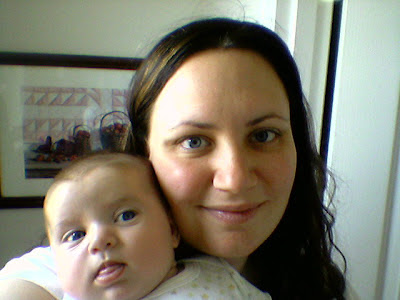 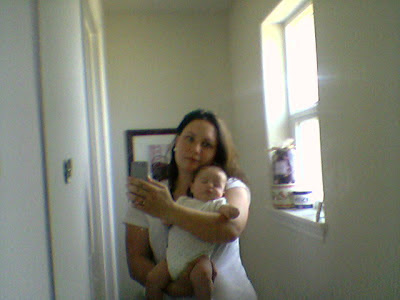 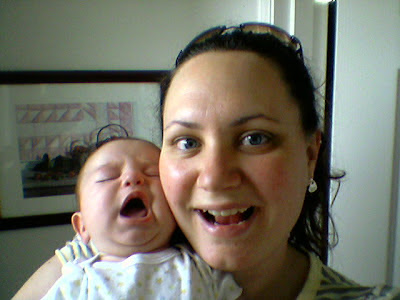 Posted by Sanctification at 11:34 AM 1 comments

He feels it too

This is the first time in a long time I have found a living example I could connect with.

Yeah, I'd heard about the prophet Elijah and how he had a great spiritual high followed by a depression. And I heard about Peter and his passion for Jesus that led him to pride and say "even if all others fall away, I won't." And I saw Moses, how though he was told as a young man who God was and that he belonged to God's people, it wasn't till he was an old man that God personally gave him a testimony of it. These stories have brought me some comfort to think there is hope for me.

It's this story though that helps me most, so far: Jesus asked three times in the nighttime of the garden before his arrest, "Take this cup from me."

Jesus was the one who in the beginning set forth a battle with a fallen creature named Satan. He is the one who designed the idea to place a tree of choice in the middle of Eden, and who cast humanity out of paradise with a curse, the cherubim and their flaming swords preventing return. Jesus designed all this as the fate of our universe. And yet here in the garden He said "Everything is possible with God. Take this cup from me." So I assume He could have done it. He had everything at his command. He could have gathered up all his saints in a single moment, even without suffering and dying; without drinking that bitter cup. He could have made our universe without needing a Savior to suffer.

Why drink it, Jesus? You have all power to stop it. You are deeply distressed and troubled. You know that they all are just about to flee your side. Even the Father will turn His back. It leaves you all alone, and friendless, pressing on to do what had been set out by your plan.

Oh... so You really do understand the forsaken, then.

Why is it that God came for the broken and for the sinners? The oppressed, those without, etc.? Why does he call himself their God? It seems to me God is claiming to be all about a group of people who want nothing to do with Him.

The account of Jesus in the garden before his arrest is a fulfillment of prophecy in Psalm 88:8....

"You have taken from me my closest friends
and have made me repulsive to them.
I am confined and cannot escape."
Posted by Sanctification at 1:00 PM 3 comments

Sometimes I watch the baby sleeping and I think of him with a "her" pronoun, catching myself by surprise. But this is no girl-baby; no, this little one is going to be a man. Right now he's just a baby and all babies have been girls to my thinking.

I never thought till this week what that would mean... in the future. I only spent time thinking about the wild busyness of toddlers. He looks innocuous enough. But he's going to grow up to be way taller than me. And bigger than me. He's going to want to date girls....

Then I had another thought. I might always be the one woman who is perfect in his eyes, to which he compares every other. He will always love me. He will always be tender-hearted toward me. This boy will be unlike any other kind of relationship I have known.

For now I delight in his baby ways. He swings his fist on the end of a straight arm in a circle around my face. Then he bends his arm and swings that little fist in a circle around his mouth. I translate that "You; here." And when we sleep together I move him as far away as I can without him losing contact. He's a good baby. It's enough for him to pound his fist randomly on my shoulder to make sure I'm still there, although as he grows that pounding till he's asleep gets harder and harder!
Posted by Sanctification at 5:09 PM 2 comments

Dear LORD, you are precious and I love you. Thank you for not giving up on me, for letting me choose every day whom I will follow, and never pressuring me to choose you. Thank you for meeting my needs and even having enough grace to surprise me with abundance I do not expect to come my way. Please, LORD, do not delay in aiding me at the right time so to not strain my trust in you. Come near to me. Cleanse me. Give me strength. Give me joy again-not the emotion and feeling-but the kind that makes a foundation for everything I do. Give me the kind of joy that makes me not keep count of my sorries. By wisdom, or comfort, let me have peace... where this is going. I want to be sensitive to the Holy Spirit again. Lead me back to being sensitive. I want to be living in the center of your will, mark 14:12. When you show me what the answer is, please, help me to remember to obey it afterward, mark 14:15. Do not forget LORD those whom I love-what grace you give to me let it pass over them first and more abundantly than mine. Prove yourself by love not by shame. When you move, move me gently and draw me by your goodness. When you show me answers, I ask you to help me to also obey them and not wait. Help me to see your pleasure in me. Show me how to love you-reveal something this week that I can do to make you glad. Give me clarity of mind, please, I need your help to think. Please help me with headaches and dizziness and lack of sleep. Most importantly LORD don't let me go don't let me go. Let me find moments and ways to keep on talking to you. And thank you for helping me even now... you are fair and kind. In your Name I ask these things; let your glory reign in me and all whom I let my vision fall on.
Posted by Sanctification at 10:13 PM 0 comments