What did Jesus mean when He asked this question? And what is the answer?  Matt. 9:2-8

Then behold, they brought to Him a paralytic lying on a bed. When Jesus saw their faith, He said to the paralytic, “Son, be of good cheer; your sins are forgiven you.”
And at once some of the scribes said within themselves, “This Man blasphemes!”
But Jesus, knowing their thoughts, said, “Why do you think evil in your hearts?

For which is easier, to say, ‘Your sins are forgiven you,’ or to say, ‘Arise and walk’?

But that you may know that the Son of Man has power on earth to forgive sins”—then He said to the paralytic, “Arise, take up your bed, and go to your house.” And he arose and departed to his house.
Now when the multitudes saw it, they marveled and glorified God, who had given such power to men.

Posted by Sanctification at 8:18 PM 4 comments

The LORD did not intend for me to suffer with doubt after I received the gospel. Doubt is a weapon of the enemy to keep believers inactive. I'm thinking of the woman at the well when I think about God's heart for me. She heard the word and she left amazed. Leaving her water pitcher behind, she went to tell everyone she could find. That's God's best. That's the way He would want it to be like, for all His people, I think. Unfortunately there have been many, many teachers who have squeezed their words in-between Christ and my heart. They promote distortion over what it takes to be saved and by doing so steal the headship of the Spirit. Thank God for Zane Hodges. Hodges cleared that up to let the scripture say exactly what it says. So that I can be like that woman at the well again - confident, and on fire for His truth; personally in awe of it. No longer do I rely on a mediator, a teacher, not even the sincerely beloved Hodges! I have Christ's Word, and my own soul to reply. And that is all I ever needed. 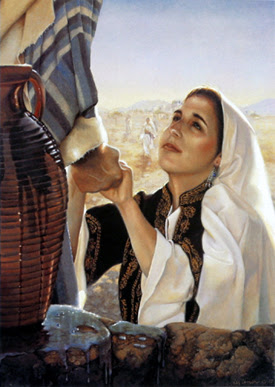 Posted by Sanctification at 1:12 PM 9 comments

Are the Apostles the Only Predestined?

Blessed be the God and Father of our Lord Jesus Christ, who has blessed us with every spiritual blessing in the heavenly places in Christ, just as He chose us in Him before the foundation of the world, that we should be holy and without blame before Him in love,  having predestined us to adoption as sons by Jesus Christ to Himself, according to the good pleasure of His will, to the praise of the glory of His grace, by which He made us accepted in the Beloved.
In Him we have redemption through His blood, the forgiveness of sins, according to the riches of His grace which He made to abound toward us in all wisdom and prudence, having made known to us the mystery of His will, according to His good pleasure which He purposed in Himself, that in the dispensation of the fullness of the times He might gather together in one all things in Christ, both which are in heaven and which are on earth—in Him.  In Him also we have obtained an inheritance, being predestined according to the purpose of Him who works all things according to the counsel of His will, that we who first trusted in Christ should be to the praise of His glory.
In Him you also trusted, after you heard the word of truth, the gospel of your salvation; in whom also, having believed, you were sealed with the Holy Spirit of promise,  who is the guarantee of our inheritance until the redemption of the purchased possession, to the praise of His glory.

Here is a thought I haven't tested anywhere yet, and it may be a complete dud, because I don't know how to read original languages of the bible. Here goes....

Can we read the "US & WE" in Ephesians 1:3-12 as meaning only Paul and the Apostles? Verse 13 says "YOU also" and the pronoun changes, to perhaps mean the church at large...? So there are two groups being discussed in Paul's letter.  There are the "Us's" and "We's," the Apostles; and from authority they write.  And then there are the "You's," which is everyone else.  Paul says that he learned "the mystery" from God and has been in charge of sharing it (as one of the holy Apostles and Prophets) in the beginning of chapter 3. He uses the pronouns in this way, "it has been given to ME for YOU" eph 3:2. Here is Ephesians 3:1-13

For this reason I, Paul, the prisoner of Christ Jesus for you Gentiles—if indeed you have heard of the dispensation of the grace of God which was given to me for you, how that by revelation He made known to me the mystery (as I have briefly written already, by which, when you read, you may understand my knowledge in the mystery of Christ), which in other ages was not made known to the sons of men, as it has now been revealed by the Spirit to His holy apostles and prophets: that the Gentiles should be fellow heirs, of the same body, and partakers of His promise in Christ through the gospel, of which I became a minister according to the gift of the grace of God given to me by the effective working of His power.
To me, who am less than the least of all the saints, this grace was given, that I should preach among the Gentiles the unsearchable riches of Christ, and to make all see what is the fellowship of the mystery, which from the beginning of the ages has been hidden in God who created all things through Jesus Christ; to the intent that now the manifold wisdom of God might be made known by the church to the principalities and powers in the heavenly places, according to the eternal purpose which He accomplished in Christ Jesus our Lord, in whom we have boldness and access with confidence through faith in Him. Therefore I ask that you do not lose heart at my tribulations for you, which is your glory.

My turning point in being challenged by this was trying to reread Eph. 1:9.  I'm pretty sure it says that God only "made known to [the holy Apostles] the mystery...".   If I re-read verse 1:4 with such an idea, it would imply "He chose [the holy Apostles] in Him before the foundation of the world."  The topic appears to be much different doesn't it?

As one can see, this letter seems to spend a good deal of time talking about the credentials of Paul. Not everyone learns the mystery of the gospel of salvation in Christ from the same source. Paul had it revealed to him by the Spirit of God at the turn of the age. Notice that Apostles come to know the gospel from the new administration (dispensation); however "You" meaning the Ephesian church, comes to know the gospel when it was preached to them from other men. Notice also that the "Us," meaning Apostles, were the "first to trust in Christ," and of course they did precede the Ephesian believers. Would not God predestine that those who would first be given the gospel message personally as Paul had, as specially selected from the beginning of time to successfully bear and share the gospel truth? It would be important that they would receive such a supportive measure of God's power and grace to be sufficient ministers at the opening gate.

Doesn't it make much more sense with the whole "predestination by God to salvation" business if it is for a very limited group? What does the passage really say is "predestined" by God?

In Him also we have obtained an inheritance, being predestined according to the purpose of Him who works all things according to the counsel of His will, that we who first trusted in Christ should be to the praise of His glory.

"Should be" to the praise of His glory. "Should be" is defined as, "to happen." Predestination means... concerning Paul and the other Apostles, He would meet His desire; He would be glorified.

Has anyone anywhere said this before? Is this totally impossible by the knowledge of bible scholars, and that is why I have not heard it as of yet?
Posted by Sanctification at 10:06 PM 2 comments