The most convincing LDS sermon yet

The young man "Benji" you are about to see had an interesting story to share when he first got some notoriety. He said in one of his background clips on the show that when he decided to go on mission trip he decided to give dancing up, and he did for two years. There was a girl who said she would wait for him, but when he got back he received an invitation to her wedding with another person. He was heartbroken and now he looks forward to his opportunity to do everything with his dancing that he waited so long to do.

For more of Benji... he's such a funny guy! Watch this:


They asked about his religion, however, after performing this saucy routein:

Posted by Sanctification at 10:29 PM 0 comments

"He cast out all the demon posessed in that place"

I've figured something out.

You wanna know why it says over and over throughout all the gospels that Jesus constantly cast out demons wherever he was welcomed? Is that just a 2000-year ago thing? If it applies to the modern Christian, how?

Behind every unpleasant thing it is a demon responsible, working in us to create it. Well, you believe in satan, don't you?? Then why not in demons -- fallen angels who serve him and do his purpose? Okay; some people have more than others. That is because you have to allow demons to come in. When you open yourself up to a message (the word of God is Jesus, so yes the words of lies are demons) and like it, that's giving permission to a demon to do something in you. So when you're sick, it's because of a demon's work in you because of some sin that you committed (where you opened yourself up to a non-Jesus message). Commercials are enough to do the trick. So is music. The most common and most plentiful way demons enter in is through idols.

An idol is something designed by our desires to exhibit in part, attributes of goodness. When we identify with anything in this world, we are bowing our heads to that idol, behind which lie demons waiting to come in. When you're even simply unhappy because you know you have a bad habit and you wished you didn't, that's because a demon has access to pillage some aspect of your heart or mind. You can't reach wholeness like you know is possible to become. You're stuck in being a broken person.

And when the name of Jesus was invoked, or when He himself commanded, the demons always left. And people were healed, the lame were made well, and people gained their sanity and peace back. These were Israelites! They already had sonship with the Father; all they lacked was freedom. We too have sonship with the Father, so we too can utilize the name of Jesus to cast out our own demons.

When I pray something simple like, "Please, God, help me," he answers me, but specifically He is using his wisdom and authority to remove some kind of oppressive demon and its work. I can feel it; it's like a miracle, the thing I felt there for so long no longer bothers me. I am above it.

I've been wanting to say in a blog for a long, long time: behind every idol is a demon. Every fantasy or appearance of good that does not come from Christ, is an idol. What is the cost for spending time at that altar in your day? Will a demon of anger enter in, with which you will struggle the rest of the day to keep under control? Will a demon of sadness come in, to keep you from getting things done?

Just notice what happens to your heart after absorbing yourself in things you know aren't the very best for you. A while after you have finished dipping into it, maladies begin to appear. Don't they? This is what I've noticed in myself.
Posted by Sanctification at 11:53 PM 0 comments

Well since I went to my high school reunion I wanted to keep in touch with people I haven't seen in a long time.

The reunion was neat, by the way. It was nerve-racking to migrate but well worth the effort.

If you don't have a myspace account, first read up on how to do it safely, and then make one, and I'll add you to my friend list!

See, now they called me a socialist.

When I was in high school I was given the nickname "anti-socialist".

Posted by Sanctification at 11:15 PM 3 comments

I take this up

Today I read a 1971 publication of a Jehovah's Witnesses textbook entitled, "'The Nations Shall Know that I am Jehovah' How?"

It is their treatise on the modern-day application of the book of Ezekiel. When Jehovah judged Israel through destroying them, He will do the same to those who profess Jesus Christ in a New Covenant yet prove themselves to be nothing more than adulterous idolaters as the Jews did in Ezekiel. The entire whole of Christianity (minus their sect, obviously), is in league with, and is indistinguishable from, the cultural and political heart of any nation in the world in which its religious citizens are active in policy or government. Particular shame is reserved for the nations which are commonly considered "Christian." It said that Adolf Hitler and other dictators were inciting the wrath of the God upon Christendom when they would do things such as hire astrologers as their personal advisors. Just as it was difficult for Ezekiel to deliver this upsetting news of destruction, so it is difficult for Jehovah's Witnesses to be a watchtower over all false Christians who adhere to the words of the Bible.

I did not exaggerate anything I paraphrased above.

Let me share with you some of the passages I put my highlighter on:

Page 275: "For decades now since the year 1919 C.E. this anointed remnant of Jehovah's Christian witnesses have been forewarning of the destruction of Christendom according to the prophecies of Ezekiel and other writers of the inspired Bible. More and more they appreciate what this annihilation of Christendom will mean in the way of human lives and material properties considered sacred by religionists."

Page 277: "Is this not something thrilling to contemplate, namely, the fulfillment of this prophetic drama within our generation? It will be definitely indicated when the 'great tribulation,' like the seige against Jerusalem, begins upon her modern-time counterpart, Christendom (Ezekiel 24:1-5)."

Page 224: "This meant that Nebuchadnezzer was very superstitious, relying for his official guidance upon demonistic practices, such as divination. This reminds us of how political rulers of even Christendom rely upon demonism for guidance in their political activities and decisions, the fortune-tellers and clairvoyants of Washington, D.C., for example, being heavily patronized by the national politicians who have their offices there. The Nazi director of the Third German Reich, Adolf Hitler, in his day was notorious for his dependence upon astrology, having a special official astrologer. They no more look to Jehovah for guidance than did Nebuchadnezzer."

I have three major missions:

1) To show that our entrance into a covenant with God is irrevokable because God is faithful no matter what we do.

2) That anyone can apply wrath passages to people they know who have done wrong things. I need to think of a comparable example of some group who deserved wrath for their faults but received mercy instead.

3) There is a difference between putting faith in Christ, and a culture of Christianity.

For the last two I have several ideas rolling around, so that's good. But as for #1, since they reject Romans 11 "God's call is irrevokable and so all Israel will be saved," I actually have to read the whole Old Testament now, so that I can know for myself that God is still going to save them. I'll just start with the editor's book introductions for now, to get a simple start.

I guess this is it. It's time to get the OT done. If you accept this assignment, expect poor dressing habits, tomatoes broken by a 2-year old into the carpet when you aren't looking, and papers splayed across all horizontal surfaces. You've got till Monday afternoon. Good luck. (You're going to need it.)


Posted by Sanctification at 10:24 PM 2 comments 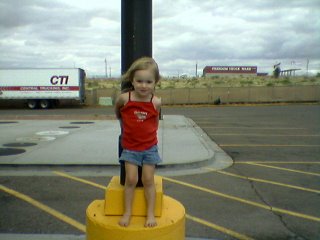 Posted by Sanctification at 8:13 PM 0 comments