Two posts ago I wrote an article proposing the gospel impacting the Patient Grower's Network.  That week I prayed for God to open a door, but the Holy Spirit did not open a way.  That is the way things go sometimes, and I trust God for an open door elsewhere.

If you have been reading here in the last year you may remember a post on the Juggalos in downtown Salem, and J.K.'s story.  J.K. and I are still friends and because of her I am getting to know her friends.  I love them.  I don't know how to spend more time downtown which is what it would take.  I could list the ways I'm failing.  The biggest one would be that I am not living in the rhythms of the lives of those God wants to reach.  I swoop in, spread a little love and gospel, and swoop back to Keizer.  What I am doing, stinks.

I love this video...

Have you ever heard of the "Person of Peace"?  God opens a door for the gospel with a Person of Peace.  It is based on Jesus' sending out of the apostles.  Jesus commanded them to preach the Kingdom only where they were welcome.  Jesus taught Go + Stay.  Mike Breen teaches in his book Building a Discipling Culture that a Person of Peace:

1.  Welcomes/receives you, listens to you
2.  Serves you

When I read that last year, it freed me up to see who it is that I need to be pouring the gospel into.

The people downtown are SO OPEN to me.  They are so friendly, so lovable.  They have shared their lives openly with me.  They are people of peace toward me.

I have good news.  After a couple weeks, the guys were talking about how everyone downtown has a nickname.  I said, "I don't have a nickname."  One of the young men named Jack looked at me and said, "I know what your name is."

"Your name is Faith.  That's what you represent," he said.

I looked at him for some time, to read his face and his body language.  Was I the kind of faith that was overbearing?  Annoying?  Preachy?  Out of touch with reality?  I didn't see any of that in his body language.  He looked genuinely positive.  My heart swells thinking about it!

There's another older man downtown who was widowed recently.  He goes to the same spot every day for two hours in the afternoon.  He greets every person who walks by, wants to know them all.  He is a believer who wants to share the love of Jesus.  His own son was once addicted to drugs for years but today he is sober and taking care of his family because of the power of God.  He is a natural shepherd with favor of the people.  It is so encouraging to talk to him.  He is also very open to me, totally encouraged by me talking in various forms about God's apostolic impulse.

All the young men respond so positively to this older man.  He was getting out of his car across the street and they all exclaimed his name loudly as he made his way, they were so excited he had come.  He got a nickname too that day.   Jack said, "there is no one as unique as you," to him.  The older man wanted to know why he was unique.  Jack said, "because you are the only older person I know who cares to get to know people, who will actually spend time with them instead of just drive right past them."  Isn't God good?

Jack is an agnostic who thinks the bible was written by men, full of inconsistencies.  Would you pray for this young man?

3.   I'm not the best discipler.  I'm more of an apostolic/prophetic than a teacher.  There are others who are gifted at teaching and I sure would like some of those to come alongside.

4.  People downtown are sometimes mentally ill, former criminals, or addicted to drugs.  How can I stay ahead of all Satan's strategies?


I guess this is something for this older man and I to figure out together.  He is struggling with trying to answer the same questions: how do we know when to trust?  I've reached out to the Union Gospel Mission to get a feel for the way things really are and the resources they have available, the real struggles they are already engaged with.

Yesterday evening I went to Sonrise Church, also known as "Stitches."  It is an interfaith discipling ministry across the street from the Salem Conference Center.  I met Bob, one of the associate pastors.  He knows some of the people at Salem First Baptist.  He showed me everything they are doing to reach the young street folk.  One girl got bored waiting for our conversation to end and she came up to Bob and just snuggled in for a hug.  This moved me.  I love this place.

They started off doing an open grill down at the bus depot several years ago.  This developed into a group doing devotions at various places on the street.  In an alley.  On the capitol steps.  Eventually they got themselves a building.

I said to Bob, "You guys are doing everything that I want to do, though I don't want to develop things toward a permanent building with permanent services.  But you've got so much resources.  You have a men's mentoring program.  You have solutions for drug addiction.  I don't have any of that."

He looked me in the eye and said, "You don't need that.  I can tell you having worked here for several years, even when it comes to something like drug addiction: it is the love that sets them free.  That's it.  And it is the only thing that will keep them free.  You've got everything you need, as long as you are filled with love from God."

Ahh!  That was a word from the LORD to me.  So I pass it on to you.  You also are adequate in Christ's love!  God IS love.  All of His Holy Spirit ministry is captured within that powerful love.

I have two women who are praying with me, we are praying for one another's opportunities to advance the gospel.  We've been doing this for a month with one woman, several months with another.  One of the ladies wants to come with me downtown!  So I am planning on picking her up with me as I go.  God is so good to answer my prayers for partnership!

I am also being mentored by the longtime ministry partner of George Patterson.  Ralph Winter, the international missions leader who coined the term "Unreached People Groups" and in so doing catalyzed a new wave of world missions, calls George Patterson one of the top three experts in the world on church growth.  I am so glad for God's favor.  I can't even tell you how special this is to me.

I don't want to do church services - I want to do what is called a people movement toward Christ.  Work within the circle of natural community that exists.  See a few come to Christ and naturally they will reach the rest of their circle.

I don't want church FOR the people.  I want church BY the people, on the street, in the places they carry out life.  Mike Breen says,

I've said it many times: If you make disciples, you will always get the church. But if you try to build the church, you will rarely get disciples.


--  "Why The Missional Movement Will Fail" by Mike Breen

Posted by Sanctification at 12:00 PM 0 comments

The Miracle of Water Turned to Wine

Yesterday I was shopping at Walmart for shirts. At the checkout I was cracking jokes with the clerk. She asked me if I wanted to keep the hangers. She said people use them for all sorts of things. I said, "and I suppose I could keep the price tags as... bookmarks."

There was a little old woman in her eighties who had finished putting her things in her basket ahead of me who came back to the clerk. She interrupted us and said, "I did all of that and forgot to pay you so I could take ice out of the ice chest on the way out the door. Can I still do that?" 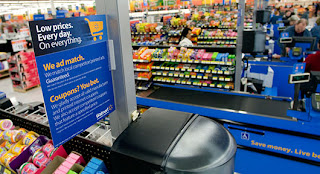 The clerk said, "Yes," but did not explain how. So the little old lady stood there for a while waiting to figure out how to do that. She finally realized and asked, "Do I have to stand in line again then?" The clerk replied in the affirmative. She kindly began to wheel her basket around to about five patrons deep a line.

I said, "I'll buy the ice," but she didn't hear me as she headed around to the line. So the clerk told the lady, "she is going to buy you ice ma'am."

The little old lady said from the back of the line, "Oh; well, I was going to buy five bags of ice."

By now the 5 patrons-deep line of people knew what was going on and was listening.

So the clerk ran up the bill and I paid for it. The clerk said, "Ma'am you don't have to wait in line, you can go get your ice. It's paid for."

She wheeled back around and came up and said to the clerk and to me, "Thank you."

I replied saying, "Bless you."

She turned to leave and then turned back one more time to add, "The ice is for my grandson's wedding. He is getting married tomorrow."

I heard several people in line exclaim their own version of wow.  The other people in line probably longed to rejoice with the little old lady.  I admitted to the clerk as she rolled away, "That -- was the Holy Spirit right there. I had no plans to be that awesome."

The clerk said, "It'll come back around to you."

I replied to her idea of Karma saying, "God is great."

I remember Jeff Vanderstelt teaching Christians "bring the better wine" to celebrations.  The miracle of turning water to wine was the first miracle Jesus did in John chapter 2.

Nice people help little old ladies. Perhaps they even do it with a belief in Karma; the hopes of some cosmic payout from an unknown god.  But only YHWH arranges care for a little old lady in such a memorable moment of her life.

The only true and living God, YHWH, used frozen ice to bless a wedding happening somewhere in Salem, today.

Nevertheless do not rejoice in this, that the spirits are subject to you, but rather rejoice because your names are written in heaven.

God lives even in me!  Celebration time!

Posted by Sanctification at 7:25 PM 0 comments