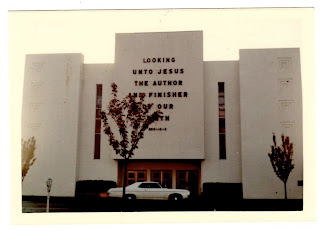 photograph of the former church front
Salem First Baptist Church in Oregon's capital city is celebrating its 150th year of incorporation. This season it will be celebrating its "sesquicentennial." The upcoming weekend, November 20 - 22nd there will be three days of exciting events.
The celebration kicks off on Friday evening, 6 pm. Former members from around the country are planning to arrive. U.S. Senator Mark O. Hatfield, once a bible teacher at Salem First, has been invited as well as our state Governor and other elected officials. CBA churches from the Willamette Valley have been sent an invitation as well.
The history of the church in the Pacific Northwest begins with the story of a delegation of Nez Perces Native Americans who traveled to St. Louis to find Captain William Clark, some twenty-five years after his famous expedition to the Pacific. They requested of him to follow through with his assurances that men would follow after Clark to teach them about God. The news of this encounter excited many evangelical Christian churches in New England. They quickly sent out a call, "who will go?"
Jason Lee was the first Christian missionary to the Oregon Territory, and he held Methodist services in the Willamette Valley (Salem) in 1834. That same year (1843) in which Jason Lee was recalled to missionary headquarters in New York, the first Baptists arrived in Oregon Territory. Baptist exploration to establish a permanent place of worship in Salem began as early as November 1850. On December 29th, 1859, Salem First Baptist's beginnings were recorded.

The weekend of celebration kicks off on Friday, November 20th at 6 pm. Beth Lambright will be sharing a Spiritual History of Oregon, and the church's cornerstone will be removed and presented via video. Reception to follow.
On Saturday, Nov. 21st a barbershop quartet and a dance group will perform, and the church's historic stained glass windows and the bell will be on display. Various historical exhibits will be open between 10 am - 7 pm. Oral history sessions, sword drills, vintage games, and a butter churning demonstration will be held.
On Sunday, Nov. 22nd former members and staff will be recognized in the identical morning services. A reunion choir will sing. Old fashioned cinnamon rolls and fruit will be concurrently served in the Community Life Center during both services and the historical exhibits will be open for viewing. RESCUE will be in concert at 6 pm.
On December 2, 1984, during SFB's 125th anniversary, Senator Hatfield spoke, "First Baptist still stands on the corner of Liberty and Marion in downtown Salem. It still proclaims the same gospel message that I heard as a boy of ten. In a world that has changed so much in my lifetime, it is a great comfort to know that."
For more information, please visit:
Salem First Baptist Church
Also you may wish to visit two websites I've created related to this event:
Salem First Baptist Church Sesquicentennial Celebration
Reconstructing Jason Lee
Posted by Sanctification at 5:59 PM

Labels: my past, news

That's an interesting post. I remember the old building front, although somewhat vaguely.

Although I recall learning about Jason Lee and others, I don't remember the the story behind the missionaries coming to Oregon. Thanks for sharing that.

It's interesting that First Baptist is celebrating the same anniversary as the State of Oregon. I recall watching a parade (including a covered wagon--the part I remember) at the age of four as a part of Oregon's centennial celebration in 1959.

Have fun celebrating. And say hi to Mark Hatfield--just kidding. He and my dad were classmates in high school, which I believe was at the Meier and Frank building site (now Macy's?) until it moved to the present North Salem High location. But Sen. Hatfield would never remember by dad.

That's neat that they went to school at the same time. Did they not ever know each other? I just think that's so unfortunate that they tear these places down. I remember reading the debate to tear down the beautiful City Hall. Now, they've erected a plaque finally, as you gaze over a car lot.

You know what I love about Salem, is every ten minute drive I make past the oldest places of American settlement in all the Pacific NW. Like McMenamins' Pub, that building was built in 1869, and it is right across the street from the location of Jason Lee's homestead which is the oldest wooden building ever built or some such title, (and is now on display in the Mission Mill museum).

I don't know diddly-squat about history and I sure wish I had the free time to learn what is.

Do you know Betty Goffrier? She is one of our oldest members. She can recall the deconstruction of the 1895 building, and how they had thrown the stained glass windows into the back of a pickup because they were taking them to the trash. She literally saved them herself from disappearing forever.

When did you live here? I seem to recall you saying you lived here once.

Senator Hatfield is on 24-hour care, and for some time we thought he was not going to be able to come, but last minute word says he may. It will be a tremendous blessing to have him present. I'm already telling my kids now, just as you were a little boy, that the next time we celebrate, I will be an old grandma and they will be blessed to remember this week.

There are only four churches that preceed our date of establishment. First of course of any kind was the Methodists, in 1834. (Once Wesleyan, now United)

Besides the Catholics, only our church has retained its identical conservative doctrine from the beginning days.

Thanks for sharing your memories, it is meaningful to me.

I think Salem High was pretty big at that time and they didn't hang out in the same crowds.

I don't know Betty Goffrier but I watched the demolition of City Hall, which I think should have been late summer or autumn of '72. I was just out of high school and had a temporary job at a nearby bank (I don't know what it's called now, but it's the building with the brick arches at 333 High St. NE) and I was able to watch on my lunch breaks. They used a wrecking ball and crane. It was a sad and dusty sight. I've got some picture of it somewhere.

I was born in Salem, grew up between Salem and Independence (near the Brunk House, which I believe is now considered an historical site), was in the Central School district, and worked at WOU (OCE when I started) until we moved to Pennsylvania in 2003, and I'm still an Oregonian at heart.

By the way, WOU has the oldest building in the Oregon University System. The first section of Campbell Hall was built in the 1870's. Of course, if I were to mention that to people here in PA, they'd probably laugh and say "that ain't nothin'." There are a lot of very old buildings around here. But then, "that ain't nothin'" when compared to Europe. That's OK; every historical site has its own significance.

I hear what you're saying about being in the only Protestant church that is still conservative after all these years. Sad but true.

It's so nice to visit your blog and visit again with good friends.

Hope it's OK to comment here on another subject. Feel free to delete me if I'm in the wrong place. I just visited Rose and Antonio's blogs and commented there, too. Isn't eternity going to be great when we can all be together forever worshipping and serving the Lord.

Yesterday (Nov. 23, 2009) was the one year anniversary of Zane Hodges' entrance into heaven. One year ago he would have heard those words... "Well done good and faithful servant!" He was a kind and gentle man who taught the grace of God and walked the walk. His life was completely devoted to the study of God's Word. He never married. His love was the Lord Jesus Christ, and his life was devoted to Him. My husband and I miss him. We count it a privilege that God brought him across our path.

If you would like to read a wonderful tribute to Zane, I think this one says it well. Just copy and paste this link. This tribute was written by a pastor who I think is in Southern MO.

Have a wonderful, blessed Thanksgiving.

All because of Jesus,

Hi Michele and all!

I hope your celebration went well!
I'm sure alot of work went into it.

Hope you had a good Thanksgiving as well, and that that continues through the season