what if He was done telling His story?

Saturday and Monday I was with my two dear girlfriends, Jenn and Julie. Jenn has been back in Oregon for several weeks because her mother was dying. In fact, Jenn has three mothers; her biological, her step and her foster mother. It was her step-mother and she was dying of lung cancer just as my grandma did. She actually passed away ten days after my grandma.
I was amazed at the similarity of the various concerns and changes that took place both during and after her death, as she told the story of her passing. Now she and her four siblings are trying to decide who gets what and prepare the house to be sold. But this is Jenn's childhood home and parting with it, will be a difficult task. So she is spending her remaining time in Oregon, busy, working on fixing up the place. Busy is an understatement; she has a seven week old newborn, and three other children ages five and under. 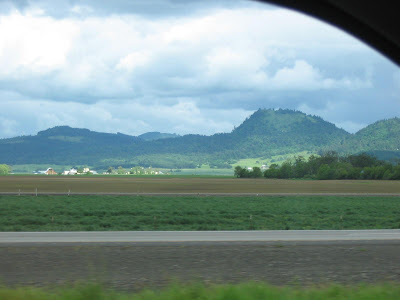 The fantastic stand alone peaks dotting the farmland near Lebanon
I drove down to her mother's home in Lebanon, here in the Willamette Valley, to help with the painting of the exterior and the care of the children. There was plenty to do especially when I added my three children. But we had time to talk about things. It has now been a year since her own grandma and tragically her foster sister suddenly passed away as well. Her foster dad had to step down from being an elder to process this shock, which was a huge loss to the church. But Pastor Joe Lombardi is still preaching as their interim pastor. And I am glad for it because he is such a loving and godly man. I certainly feel compassion on that family. Dr. R. preached at family camp, and Jenn enjoyed his sermon and prayed him through it. I forget that he pastored a small church somewhere in the Valley, here, and I wonder which one it was?
She was delighted to hear my encouraging memories. While we were all in college ten years ago I once stayed in this home for the weekend and it was in the living room that Jenn asked me, with that heart of obedience, "Michele, we are going to church tomorrow, and since you don't know any worship songs, I was hoping we could learn a couple so that you can participate." So she taught me the song "Lord I Lift Your Name On High." Then she pulled out "It is Well With My Soul" and asked me "Have you heard the story why this was written?" I had not, and she told me the whole thing to my amazement. I imagine both of us silently appreciated that hymn once more as we scraped and painted.
Four years later Jenn got married. I remember I stayed with her step-mom for a day and we talked personally. Even then she had been fighting against cancer and she had become intimate with Christ through it. In fact she was so attentive and normal toward me, that I remember leaving thinking, I need an older woman mentor who will invest in my life. That was now six years ago. It is because of her step-mom that I sought and found my mentor in Christ who is such to this day.
But... what if this was all there was? What if He were done telling the story of His abundant goodness through my circumstances? What if all the splendor I'd know of Him, was in my past? What if He grew tired of working with me? The Lord gave His Word at today's beginning moment:

"...persecuted, but not abandoned...." 2 Cor 4:9
Funny, how the smallest pieces of scripture speak the loudest, isn't it? The troubles I have now are not signs of being abandoned. On the contrary! They are part of His redemptive design. It is a verse which will comfort my dear bereaved friend.

Blessing came through recalling things which are both her and mine origination stories. I certainly find God's power working through being exactly where He has placed me; here in the Willamette Valley. It is a place that is known for having the lowest attendance in church in the entire country (only five percent attend any sort of church). Knowing this makes me excited for the sake of the gospel. These are the moments and events and people that are creating me into the person God has passioned me to become for His glory. No - He is not done telling the story.
May His will be done.

Have a joyful and celebrant Independence Day holiday!

Posted by Sanctification at 11:14 PM

Labels: friends, my past

Your comment is gone :( Hope you come back soon and leave a new one. I've got like six blog posts in my head, one is actually already written but not published. You won't be directly interested in most of those but a couple of them (if I ever get that far, don't ask me why but I guess I still ponder upon a few thoughts that are interesting to me at least) are directly related to some of the stuff you've been patiently pouring in for me, over here.

Show me how to make the gnarly bigger bucktooth...

Yeah, I deleted my comment because I was going to change it but I had to go meet my brother and ended up being gone almost all day. I've got to have the last of my things moved by this weekend so I'm running around like crazy trying to get everything done. I'm driving back and forth between places and about to lose my mind. :) I'll be so glad when I get completely settled again.

I saw where you asked what time zone the funeral of Alvin's father was in. It's at 10:00 AM in some small town in Washington-so that would be in your time zone.

I've got to hit the road again in a few minutes to move some more stuff and meet my other brother for lunch. I'm interested in reading the new posts you have planned but I don't know how much time I will have to do anything but read them--but I will definitely be reading because you do have some great thoughts on things. One thing about you is I know you are always digging deeper! :D That's something I need to do too.

Why do you need a gnarly bigger bucktooth? I like your bucktooth just the way it is. How about this?

Now ya got a mohawk, big scary eyes, and one VERY sharp bucktoofy in front fer bitin--OH YEAH! (no, it's not a goatee). No one will mess with you now--you be badder dan Nakita (or is it Nikita?-you know..that La Femme Fatale gal.) :D You might even scare Alvin and have him an Ruthy runnin fer da hills! I know I be gittin skittish if'n I see dat toof comin my way! i still think you be more suave da oder way.

Like I said, I'm still really busy but I'll be tryin to keep up with what's goin on. I'm always interested in what you have to say. Isn't it great that God isn't ever going to give up on us or ever forsake us? He's not done telling His story. He will be telling it forever, and we will be a part of it. Isn't that exciting?!

I'm really thankful to know you and have you for a sister in Christ. Don't let anything get you discouraged OK?

Oh, I forgot to say that the funeral is TODAY at 10:00 AM Pacific time--not yesterday like Alvin said at first. He told me that in an e-mail.

Gary you are so much fun! :D I get reading and laughing and then I keep laughing as I read the rest, seriously. The DEEP SOUTH must be the funnest place on earth. :D

I can't believe you're still moving. I was afraid to ask. Well, hang in there and I can't wait till that's all resolved. It's praise worthy that you get to stay at your church. I don't know what I'd do without mine.

Yeah I was praying right through the day.

Yaah, you be rite...ever day be a hollarday here in Dixie. We be havin sum foot stompin fun all da time! An all da garden vittles you kin EAT! I mean it be FINE!

BTW you are too kind, I am not the thinker you compliment me, really I need to spend more time reading and I'm reminded of that all the time.